Earlier, having only seen pictures of both V. wightii and V. thwaitesii which were not too clear, I was confused as to what differentiated the two species.  From what I could make of the images, both were a tan colour with white lips.  No further detail was evident from these pictures.  I have grown both V. wightii and V. thwaitesii in my greenhouse but since V. thwaitesii is from a higher elevation, it failed to bloom for me.  This year I had the opportunity to visit the natural habitat of V. thwaitesii, see it in bloom and take some pictures so as to clear the confusion related to the two species.
Listed below are the features that differentiate the two species.
Plant Morphology:  Both of the species have curved leaves but V. thwaitesii is the smaller of the two with a mature plant with more than 20 leaves being under a foot tall.  The internodes of V. thwaitesii are very small compared to V. wightii which has bigger internodes.
Plant habitat:  Both of them are found in locations which receive sufficient light and a lot of air movement.  V. wightii is found in the plains at 0 – 100 msl while V. thwaitesii is found at elevations of 800 – 1000 msl. 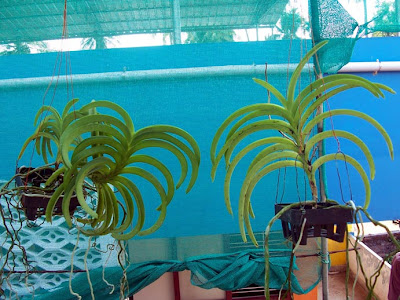 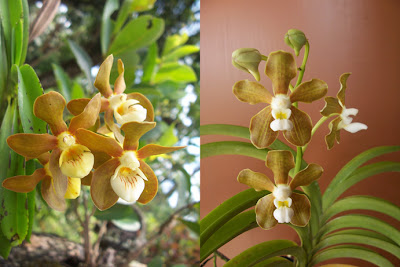 Vanda thwaitesii (L) and Vanda wightii (R)
I would like to state that I am no student of Botany and whatever I have mentioned above is what I have seen and observed personally.  Any discussions and suggestions are welcome.